A cool event organized. This time a concert in Argentina! 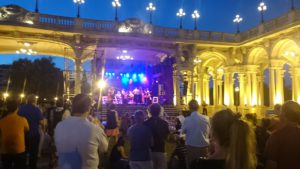 Early in December Saint Petersburg Production Team realized a cool project: we built up an amazing event – a concert of the russian folkestra Russian Style in Buenos Aires.

«Russian Style» makes folk music modern, popular not only in Russia but all around the world. Until now the fact that «Kalinka-Malinka» can be played on balalaika only was evident fact but Folkestra presented also Nirvana, Rammstein, Bon Jovi and Adele and it became a big surprise. Russian Style Folkestra boldly mixes different styles and weaves of very different culture into a single thread of music.
We are proud to tell – the event was a complete success.
Our partners in Argentina helped finding a unique artistic solution – integrating the stage into a wing of a local museum. Take a look to the short video bellow and feel the atmosphere of the place.
Share