We are proud to tell: another complex photo shoot project realized with the help of Filmspb.TV in Russia. 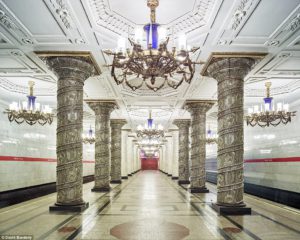 Saint Petersburg Production Team is proud to tell: we helped the magnificent photographer David Burdeny to realize a unique photo shoot in Russia. The hardest thing was to get the official filming permits from the metro authorities in Saint Petersburg and in Moscow. Please enjoy the result of the filming at David’s official website http://davidburdeny.com/ Russia “A bright future”.

“Bleek Magazine: How difficult it was to manage shootings here? I guess it is not so easy to break through workers of the Moscow metro at nighttime.


David Burdeny: As a Canadian requesting permission directly, I found it impossible to get an answer back. I was probably doing something wrong in my communications, but it proved to be a dead end. As soon as I teamed up with a local fixer, everything fell into place and within a matter of months we had permission to make the images. My producer was very skilled with negotiations and I’m convinced that any other person wouldn’t have had the same results“.

We would like to thank David for such warm words to describe our work.
You can find the complete interview here.
You will find other material about this photo shoot under the following links:
The Guradian
Daily Mail
My Modern Met
Borepanda
Metro.co.uk
Share