General information for filming in Kazan

Kazan, the capital of the republic of Tatarstan, is a beautiful city that the locals sometimes refer to as ‘Russia’s third capital’. FilmspbTV will help you in filming this multicultural city, where you see side by side contemporary architecture with Islamic touch, the magnificent and recently renovated Kremlin, the ancient Russian settlements with their Orthodox temples and the ancient Tatar settlement with its mosques.

You can get to Kazan by train, or flying from Moscow or St.Petersburg. Highspeed train from Moscow will soon be launched. 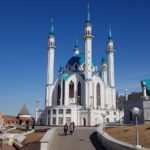 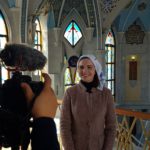 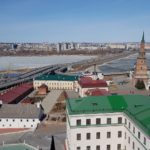 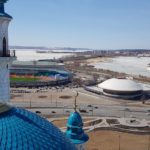 Key locations for a TV production in Kazan

The symbol of Kazan is the Kul Sharif Mosque. Kul Sharif is situated in the real heart of the city – the Kazan Kremlin. The mosque was built in 2005 for the 1000th anniversary of Kazan. From the outside, the mosque is decorated with white marble and has four high minarets crowned with turquoise domes.

From the inside, the main dome of Kul Sharif resembles the Kazan hat, like those which Tatar Khans used to wear and which symbolized their power.

The walls of the mosque are also decorated with Persian carpets, stucco work and stained glass windows. The mosque courtyard can accommodate up to 10 000 people. FilmspbTV can provide you all the required permits for filming in Kul Sharif as well as in the Kazan Kremlin.

The Kazan Kremlin, considered the historical center of the city, was founded in the X c. Nowadays, the Kremlin’s architectural complex consists of XII-XV c. buildings, as well as white stone fortification walls and towers built in the XVI c.

Other great locations for filming in Tatarstan 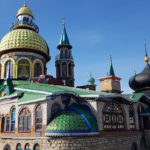 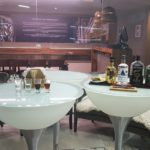 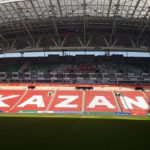 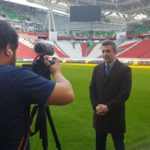 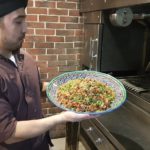 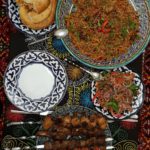 The Temple of All Religions is yet another landmark of the city. The one of a kind temple is dedicated to religions of the whole world. The temple’s building was erected in 1994 after artist Ildar Khanov’s project. No services take place in the temple as it is more of a cultural center and a symbol of all the world’s religions than a functioning church.

The Temple’s architectural ensemble includes a Russian orthodox church, a mosque, a synagogue, and a pagoda. The design of the complex reflects symbolic elements belonging to 16 religions. Inside of the Temple there are exhibition spaces where cultural events and meetings are held. The eclectic style of the Temple and the fascinating concept behind the Temple’s exterior attracts both tourists and Kazan citizens.

The exotic mix of Asian and European cultures is most evident in local cuisine. In Kazan you will find on the dinner table Tatar dishes neighboring Chinese dumplings. There will be also Uzbekistan and Tajikistan dishes. Tea is very popular in Tatarstan. It is usually served with local honey and dates. In Kazan people also drink sherbet, a Turkish sweet drink made of fruit and honey. You might be confused by excessive sweetness of the local sweets.

In the republic of Tatarstan, eating is surrounded by a strict ceremonial, formed on the basis of Islam ethics and Chinese dinner ceremony. Certain dishes are usually served in a certain combination: for example, clear soup is always served with dumplings. FilmspbTV will help you learn about traditional Tatar cuisine and organize an authentic Tatar dinner.

Contact us for starting your TV production in Kazan!