Filming Rostov the Great: the real pearl of the Golden Ring of Russia

General information about filming in Rostov the Great 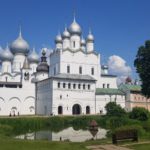 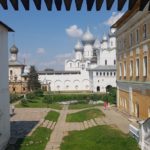 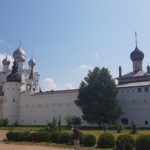 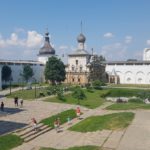 Rostov is the oldest city of the Golden Ring of Russian cities. It was first mentioned in the chronicles in the IX c.. It is famous mainly for its religious architecture and its bishop’s residence often called ‘the Rostov Kremlin’. Filming in Rostov is cheap and gives great possibilities to film stories about the Russian middle-ages.

Located on a lakeside, Rostov appears to be an enclave of untouched antiquity even among the Golden Ring cities, because it escaped rebuilding in Soviet time. For example – the Bishop’s court. It is the historical center of the city: the high-walled Bishop’s Court is bordered by the Cathedral square and by the Bishop’s Garden with the five-domed Church of Grigory the Scholar.

Rostov architecture. The key reason for any filming in Rostov.

Most of the existing buildings of the Kremlin were designed simultaneously according to the wish of the Rostov bishop in 1670-1683, and thus constitute a solid architectural ensemble. Our Rostov fixers can help you in getting the permits for filming inside and outside of the Kremlin temples.

Filming inside orthodox temples in Rostov the Great.

The Assumption Cathedral is an impressively looking five-dome temple with little external decor and a four-storied belfry. Inside of the Cathedral you can film its richly ornamented iconostasis. The belfry is one of the main attractions of Rostov: it has 15 bells, and each of them has its own name and a story at times is similar to a human lifestory. Next to the temple, there is a Water Tower with an observation deck that offers an incredible view over the city.
Among the modest-looking temples of the Bishop’s residence quite outstanding is the Church of St. Hodegetria. It represents the Moscow Baroque style. 20 stucco cartouches of unusual shapes are decorating the arches of the one-domed brightly-colored church.

The most elegant looking temple of the ensemble is the Church of St. John the Evangelist. It is the gateway church of the Bishop’s residence and adorns the site with its strict yet elegant appearance. Inside, you can film the impressive well-restored frescoes that cover completely the temple’s walls. Some of these temples are in use. Consequently for filming at these locations you need a permit from the Russian Orthodox church. However the processing times won’t be very long, around 7-10 days.

Other locations for filming in Rostov the Great:

On the territory of the Kremlin, you can also film secular buildings, the so-called Whiteand Red Chambers. In those luxurious apartments with a huge front porch, the Bishop used to receive his influential guests.
The famous Rostov Trading Arcades are situated just near the walls of the Kremlin. They occupy an entire block and in addition are the only fully extant Trading Arcades of the Golden Ring. This is a site perfect for filming the everyday life of the city: here commerce is blooming and, as the central market of the city, the Arcades attract both tourists and locals.

For filming in Rostov the great with all the required permits – please contact us here.