Local laws and regulations, safety and risk assesment in Russia.

First of all – please keep in mind that you have to carry your passport with you at any moment. As a foreigner you must register your stay with the local branch of the Federal Migration Service within seven working days of arrival in Russia. Most major hotels will do this automatically. So if you stay in private accommodation the owner of the property must do this for you. Please read the following safety recommendations if you plan travelling to Russia with filming purposes. 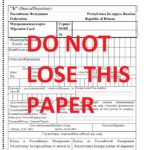 This is very important! Keep the small white paper you get at the imigration control! All foreigners entering Russia must sign a migration card, which is produced electronically at passport control. This card is in two identical parts, one of which will be kept by the immigration officer upon your arrival. You should keep the second part of this immigration card with you. (paper example on the photo). Show this paper together with your passport when checking in at a hotel. The loss of this white paper leads to a fine when exiting Russia. The fine is not really big, but it takes a lot of time to pay it. Thus upon departure it may be critical and you may be late for your plane.

Driving in Russia. Legal requirements for driving a rented car in Russia.

In order to drive a rented car in Russia you will need to provide the following documents:

Russia has right-hand traffic. Nevertheless some regions of the country have many vehicles with the steering wheel on the right side. Vladivostok and the entire Russian far-east is relatively close to Japan. During many years importing a second-hand car from Japan was much cheaper than brining it all the way from Europe.

Russia for many years had a zero alcohol tolerance level for driving. At the moment the legal limit for drinking and driving in Russia is 0.03.

If you are entering Russia on your own vehicle brining filming equipment – please doublecheck that the customs you plan crossing operates ATA carnets.

For traveling in a train in Russia you only need buying a ticket and to have your passport on you when boarding the train. Most train conductors are very friendly, but often their english is very basic. Use google translate to explain yourself. As trains in Russia cover very long distances your journey may take several days. The Transsiberian train from Moscow to Vladivostok itinerary takes 6 days. There are 3 main wagon classes in Russia:

1st class sleeping wagons. 2 beds per compartment, very comfortable. Has air con, meals can be brought to your comparment.

2nd class sleeping wagons. 4 beds per compartment. Ideal for film crew travels, as you can buy a compartment for 2 people and use the extra space for the film equipement.

3rd class sleeping wagons. Not recommended for travelling with filming equipment but great for filming inside. The compartments have 4 beds, but they do not close creating a common space in the wagon.

If you have any kind of trouble or questions – contact the train attendant. There’s one in every vagon.

Each long-distance train has a wagon-restaurant where is possible to order food or drinks.

Filming in a train in Russia is only possible if you have a media visa and an accredittation issued by the ministry of foreign affairs. Please contact us for getting more information about filming inside a train. For filming inside a compartment you need buying it entirely. Filmin at each particular train station requires separate permits. Mounting a GoPro camera outside the train is impossible due to insirance complications and theinternal rules of the Russian Railroads.

International travellers transiting through Moscow should be aware that British and US nationals require a visa to enter the Russian Federation.

If you are flying to some remote areas of Russia having a connection in Moscow or Saint Petersburg – you have to undertake the customs procedure in the city where you first(!) entry the country.

In some remote regions of Russia the aircrafts that are used by local air companies can be quite old. This particularry refers to the region around lake Baikal and Yakutia. Kindly check with your risk assesment if you are allowed to fly with such airlines.

Some regions have climatic conditions that make impossible to tell when will be the next flight. For example at Solovki, north of Baikal (Severobaikalsk), Yakutia. We recommend not having tight filming schedules when filming in these areas.

Some Russian Air Companies are highly NOT recommended for travelling with filming equipment. “Pobeda airlines” doesn’t allow to take full-size cameras on board as hand luggage as they excess the size of the allowed cabin luggage. The most reliable air companies are Aeroflot and S7 airlines.

Most visitors from UK and USA will have a trouble-free visit to Russia. Nevertheless pickpoketing happens often downtown in the big cities like Moscow or Saint Petersburg. Thefts from vehicles also happen in some areas of the country.
Sadly racially motivated attacks sometimes happen in Russia. Especially high risk around poor semi-abandoned cities with high crime rate.

Travelling to some regions of Russia with filming purposes may require hiring some security officers.

Risk assesment for TV production and filming in Russia.

If you plan filming in the cold in remote areas of Siberia, or filming a travel show on the Transsiberian – risk assesment is required for any TV production. The fixers of FilmspbTV for many years help calculationg the risks and creating the risk-assesment documents required for any big TV production. Knowing the filming locations, dates and the size of the film crew – we will send you all the required information for making your insurance company happy.

Our production managers will create a list of medical facilities around your filming location in Russia. We can hire an ambulance or rescuers for being present close to the film set. We have contacts of great english-speaking paramedics with filming experience in different Russian regions.

FilmspbTV works with excellent local insurance brokers who can help insuring any TV production in Russia. If you need increasing the insurance limits for any kind of transport or having a production 3rd party liability – send us the information here as soon as possible.