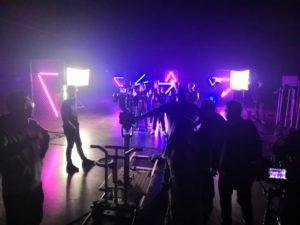 In 2019 FilmspbTV made a very complex project in Moscow. Ordered by Sondergroup (China) this commercial involved a very complex preparation process. For example building and mounting the LED structures was quite a challengs.  Beacause of working with the best gaffers, dolly crew and set constructors the result is great!

Moscow and Saint Petersburg provide great possibilities for filming commercials of any complexity. What do we have? First of all – several studios (up to 18000 m2) and a wide choice of light and filming equipment. Second – a higly professional and english speaking film crew (DOP, Gaffers, Soundman, Dolly, Crane crew, Make up artists and Stylists). And third, most important, – our fixers. Ready to help you in the preparation of any filming of any complexity.

Due to the low excahnge rate of the russian Rouble the filming equipment rental and technical services in Russia often are much cheaper than in any other country. However the quality of the services and the skills of the local film crew members are very high.

In conclusion – please enjoy the result of this production:

If you plan filming in Saint Petersburg, Moscow, or in any other city in Russia – don’t hesitate to contact us. Our fixers will answer you within 24 hours.