FAQ about filming in Russia

Here’s a list of Frequently Asked Questions about filming in Russia.
Working for many years in the Russian filming market brought us to the fact that there’s a list of things that almost every crew needs to know. For further information please contact us on info@filmspb.tv.

1. RUSSIAN VISA AND CUSTOMS. WHAT WE NEED FOR FILMING IN RUSSIA?

1.2 For filming purposes should it be a business visa or tourist visa is enough? Or we need a journalist visa for filming in Russia? How long it takes to get a visa?

It depends on what exactly you plan to film in Russia. If you are not planning to sign contracts, get official payments in the country or to act in any way in the name of any foreign legal entity you DON’T NEED a business visa. A tourist visa will be 100% enough for your filming. However if you plan traveling having a carnet – we recommend having a humanitarian or business visa.
If you need a business visa we can make an invitation for you.
IMPORTANT! The invitation issuing procedure takes 15-20 working days.

1.3 How can we bring the equipment into the country? Do you provide customs assistance?

The best way to bring into the country filming equipments – to use a CARNET.
Please check twice the list of goods shown in the carnet, especially the serial № of all the goods. All the equipment can be arrested for 72 hours at the customs if there’s a small mistake in the papers.
We are not providing customs broker services. Nevertheless, Saint Petersburg Production Team can help you with the customs in Russia. We can provide you all the information needed or to find a reliable local customs broker. Above all – these are the key things not to forget when dealing with Russian customs: firstly please make a translation of the carnet into Russian. Secondly -make photos of the content of the bags in open. Place these photos on a USB-card and have it handy.
Here’s our page with more information about Russian customs procedures.

1.4 Can we use a CARNET with a tourist visa?

Yes. In theory.
In other words – the usage of a carnet has no connection to the type of visa you are using. On the other hand – you may be questioned at the customs on the purpose of your visit to Russia. Thus we recommend having a business, humanitarian or journalist visa.

2.1 Do we need a permit for filming in the city?

For filming at the streets of Saint Petersburg small filming crews (Less than 5 people) don’t need a special permit.

IMPORTANT! Filming crews bigger than 5 people need to apply for a filming permit to the Committee of Culture of St Petersburg. The procedure of getting such a permit takes 15-20 working days, depending on the complexity of the filming.

IMPORTANT! In Saint Petersburg there’s a list of places restricted for filming – areas near to factories, ports, military objects, privately owned locations, etc. Please check your filming plan and after that send us a list of filming locations you plan to use. After that we will send you a list of required permits with processing times.

More information about permits required for filming in Russia on our dedicated page.

2.2 Can we film inside the palaces? Do we need a permit?

For filming inside any museum, palace or mansion you need to get a permit. During the high season (from May to August) many museums are not filming friendly, as they have crowds of tourists inside. Consequently some museums only allow filming during their days off. Thus we should apply for a filming permit at least 10 days before the filming date and to be flexible with the dates.

IMPORTANT! Applying for a filming permit doesn’t guarantee you access to the palace or museum. The authorities will consider your request and will give you an answer.

2.3 Are we allowed to film at Pulkovo airport? Do we need a permit?

For filming at the Pulkovo airport or in the area around the airport you need to apply for a permit from the airport authorities. Due to airport security requirements you’ll have to provide a complete list of the equipment you plan to use (including model names and serial numbers) and a list of the crew members involved into the filming.

IMPORTANT! This is a paid permit. The price depends on the area of the airport where you plan to film and on the quantity of time needed for your filming. We should apply for such a permit at least 10 days before the filming date.

2.4 Can we film in the metro of Saint Petersburg?

The metro of Saint Petersburg is the deepest in the world and it’s considered to be one of the most beautiful in the world. As a heavy heritage of the USSR, in our city metro is still considered to be a strategic object (It’s a huge bombshelter for all the population of the city), filming there is strictly banned.

IMPORTANT! This is a paid permit. The price depends on the amount of time needed for your filming and on the exact hour. We should apply for such a permit at least 15 days before the filming.
For getting a filming permit from the metro authorities we’ll need a complete list of the equipments you plan to use (including model names and serial numbers), a list of the crew members involved into the filming, the exact stations and the exact date and time of filming.

EVEN MORE IMPORTANT! Applying for a filming permit doesn’t guarantee you access to the metro. The authorities will consider your request and will give you an answer.

2.5 Can we film inside the public transport in Russia?

First of all it depends on what you plan filming. If you plan using a DSLR handheld – most probably you won’t need anythy paperwork. But for bigger filmings – without a permit – filming is not possible. Filming inside public transport has to be approved by the city authorities.
We recommend to apply for such a permit 10 days before the filming date.

2.6 How much should we pay for any permit?

There’s no fixed fee for the most part of the permits. The authorities responsible for the permits giving procedure will consider your request and will give their decision about the filming possibility and the price. Filming in Russia sometimes requires tonnes of paperwork.

3. ACCOMMODATION AND TRANSPORT IN SAINT PETERSBURG

3.1 Can you book a hotel for us? Which hotel do you recommend?

In the European part of Russia it only depends on your budget. In some remote areas like lake Baikal or Yakutia – we will give you advice where to stay and will make the reservation.  We can send you a list of hotel where we recomend to stay. Our recomendations are always based on your filming itinerary. Traffic in the city is horrible, but choosing a hotel in a good place may save you some hours daily.

Kindly visit our page about transport and accommodation services throughout Russia.

3.2 Do you provide us transport services? A transfer from the airport?

Yes, with great pleasure.
Saint Petersburg Production Team works only with drivers who have filming experience (they know how to behave during a filming). We can provide you vans for 8, 12 or 20 seats, buses for 25-40 seats or regular cars with a driver.Any kind of transport for filming in Russia.

4. FILMING IN RUSSIA IN OTHER CITIES

4.1 Do you provide filming services in Moscow?

Yes, our company has a branch in Moscow. We will be really glad to help you in organizing your filming there. Keep in mind that for filming in Moscow it is much harder to get filming permits, especially if you plan to film the key landmarks like Red Square, St. Basil’s cathedral, etc.

4.2 Do you provide filming services in other Russian cities?

We can help you with organizing your filming in Russia. Fixers in Vladivostok and in Irkutsk are availible 24/7.

A list of all the locations where FilmspbTV provides filming services can be found on this page.

4.3 Filming the Trans-Siberian and filming inside a train in Russia. What permits we need?

For filming any project inside a train in Russia there are several requirements. At least part of the crew has to travel having journalist visas. Also it’s important for at least one of the foreign crew members to get the press card from the Russian ministry of foreign affairs. These rules are applicable for filming on the Transsiberian. Filming inside a train between Saint Petersburg and Moscow. Filming on any itinerary of an overnight train.

The permit-getting procedure for filming in a train or at a railroad station will take between 7 and 14 days. Filming at railroad stations or inside a train may lead to serious consequences and unpleasant contacts with the transport police.

5.1 Can we find a busker with a balalaika in the city?

No, there are none. In other words – it’s a myth. People at the streets are not playing balalaikas!
However, if you need one – we can hire one for your filming and to place him where you want him to be. Similarly we can provide a bear or anything else that is required for your filming.

5.2 How cold it gets in Russia? Is it possible to be filming in Russia in winter?

Our coldest filming was with -42 C.  Certainly filming is possible, but it’s very hard for everyone. Grab 5 times more batteries than you planned. Our fixers will take care of the rest. Most important to have warm clothing. We can provide it when filming in Irkutsk (Lake Baikal area) and in Yakutia. We have a big experience in the logistics of cold filmings. For example, we know how to provide warm meals even in the middle of nowhere in Siberia.

Please contact us for getting closer to film in Russia. 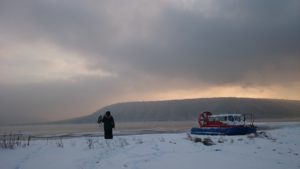