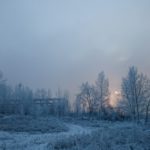 The Climate in Russia highly depends on the exact city where you plan filming.

Baikal lake region (Irkutsk, Ulan-Ude) have temperatures between -20C and -40C during the whole January and February. Lake Baikal freezes at late December or January and keeps frozen till May. The best filming period is MArch as the temperatures are mild (between -5C and -15C and sunny).

VERY IMPORTANT! For filming in winter you need 3-4 times more batteries than you would normally take to a filming.